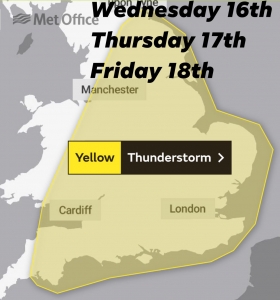 Yellow warning of thunderstorms
Areas affected: East Midlands | East of England | London & South East England | North East England | North West England | South West England | Wales | West Midlands | Yorkshire & Humber
Starts: 18:00 BST on Wed 16 June
Ends: 06:00 BST on Fri 18 June
Some places are likely to see thunderstorms later Wednesday through to Friday with the potential for travel disruption and flooding.
– There is a small chance that homes and businesses could be flooded quickly, with damage to some buildings from floodwater, lightning strikes, hail and strong winds
– Where flooding or lightning strikes occur, there is a chance of delays and some cancellations to train and bus services
– Spray and sudden flooding could lead to difficult driving conditions and some road closures
– There is a small chance that some communities become cut off by flooded roads
– There is a slight chance that power cuts could occur and other services to some homes and businesses could be lost
Issued at: 10:22 BST on Sun 13 June
Thanks to Vicky at Midlands Storm Chasers U.K
https://astleyanddunley.org.uk/wp-content/uploads/2020/09/astley-and-dunley-logo.png 0 0 Roger https://astleyanddunley.org.uk/wp-content/uploads/2020/09/astley-and-dunley-logo.png Roger2021-06-13 13:20:522021-06-13 13:20:52WEATHER WARNINGS HAVE BEEN ISSUED BY THE MET OFFICE.

Meetings are normally held at Astley and Dunley Village Hall however in order to comply with the Coronavirus Act 2020 meetings may be held remotely. Please see the agenda for details.

This site uses cookies. By continuing to browse the site, you are agreeing to our use of cookies.

We may request cookies to be set on your device. We use cookies to let us know when you visit our websites, how you interact with us, to enrich your user experience, and to customize your relationship with our website.

Click on the different category headings to find out more. You can also change some of your preferences. Note that blocking some types of cookies may impact your experience on our websites and the services we are able to offer.

These cookies are strictly necessary to provide you with services available through our website and to use some of its features.

Because these cookies are strictly necessary to deliver the website, you cannot refuse them without impacting how our site functions. You can block or delete them by changing your browser settings and force blocking all cookies on this website.

These cookies collect information that is used either in aggregate form to help us understand how our website is being used or how effective our marketing campaigns are, or to help us customize our website and application for you in order to enhance your experience.

If you do not want that we track your visist to our site you can disable tracking in your browser here:

We also use different external services like Google Webfonts, Google Maps and external Video providers. Since these providers may collect personal data like your IP address we allow you to block them here. Please be aware that this might heavily reduce the functionality and appearance of our site. Changes will take effect once you reload the page.