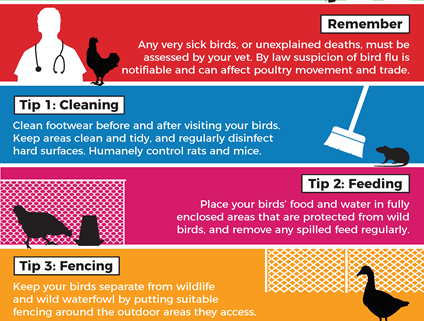 The call comes as PHE and the local authority work together after confirmed avian influenza A(H5N8) diagnosed in a number of swans in Evesham and following reports of a growing number of sick and dead swans around the Diglis area of Worcester.

With an increasing number of cases of the infection being seen across the country, on 11 November Defra declared the whole of England as an Avian Influenza Prevention Zone (AIPZ), to mitigate the risk of the disease spreading to poultry and captive birds. This means it is a legal requirement for all bird keepers to follow strict biosecurity measures and from 14 December all poultry and captive birds will need to be housed.

The A(H5N8) strain is highly pathogenic to other birds, however there have been no human cases of infection reported. While the risk to human health is considered very low, it is still vital that people do not touch sick live birds or bird carcasses, and infection control measures may be necessary if they do.

Dr James Chipwete, Consultant in Communicable Disease Control with PHE in the West Midlands, and lead consultant for flu, said: “During the last week there have been confirmed cases of avian influenza A(H5N8) in swans in Evesham, and we are receiving an increasing number of reports of sick and dead swans in the Diglis area of Worcester. We are awaiting results of investigations currently being undertaken by the Animal and Plant Health Agency (APHA).

“We know that people are concerned for the welfare of the swans, especially ensuring they are fed in these colder months, however it is important that people avoid contact with these sick or dead birds. Even though no cases of human infection have been associated with this strain of avian flu, as a precaution, anyone who was not wearing appropriate PPE while in contact with the droppings or birds in an area where the infection has been confirmed, will require close monitoring and a course of antiviral medication for 10 days from last contact with infected birds.

“We have seen a number of avian flu cases in poultry and captive birds across the country – with confirmed cases of A(H5N8) in Herefordshire last month, and suspected cases now in Warwickshire. People must avoid touching potentially infected birds at all costs, and if you do see any sick or dead birds by waterways or on your private land, please leave them and call the Defra helpline on 03459 335577. In areas where the infection has been confirmed, anyone who has been in contact with sick or dead birds or their droppings, while not wearing the correct PPE, should make sure any footwear is properly cleaned and thoroughly wash their hands in soap and water. They should then notify Public Health England’s Health Protection Team on 0344 225 3560 to arrange for antiviral medication and active surveillance of their condition. If someone handled infected birds while wearing adequate PPE, they must still undergo active surveillance.”

Dr Kathryn Cobain, Director of Public Health for Worcestershire, said: “We’re continuing to work Public Health England Midlands to monitor this outbreak of avian influenza. It’s really important that we do all we can to protect both humans and birds throughout this outbreak of avian influenza in wild birds and keep the case numbers as low as we can in Worcestershire. The bigger risk is to birds rather than people. The risk of transmission to people is low and there is guidance that all keepers must follow to help keep both themselves and their birds safe.”

Parish Council Meeting will be held on Wednesday 21st September, 2022 at 7:15 PM

Meetings are normally held at Astley and Dunley Village Hall however in order to comply with the Coronavirus Act 2020 meetings may be held remotely. Please see the agenda for details.

This site uses cookies. By continuing to browse the site, you are agreeing to our use of cookies.

We may request cookies to be set on your device. We use cookies to let us know when you visit our websites, how you interact with us, to enrich your user experience, and to customize your relationship with our website.

Click on the different category headings to find out more. You can also change some of your preferences. Note that blocking some types of cookies may impact your experience on our websites and the services we are able to offer.

These cookies are strictly necessary to provide you with services available through our website and to use some of its features.

Because these cookies are strictly necessary to deliver the website, you cannot refuse them without impacting how our site functions. You can block or delete them by changing your browser settings and force blocking all cookies on this website.

These cookies collect information that is used either in aggregate form to help us understand how our website is being used or how effective our marketing campaigns are, or to help us customize our website and application for you in order to enhance your experience.

If you do not want that we track your visist to our site you can disable tracking in your browser here:

We also use different external services like Google Webfonts, Google Maps and external Video providers. Since these providers may collect personal data like your IP address we allow you to block them here. Please be aware that this might heavily reduce the functionality and appearance of our site. Changes will take effect once you reload the page.